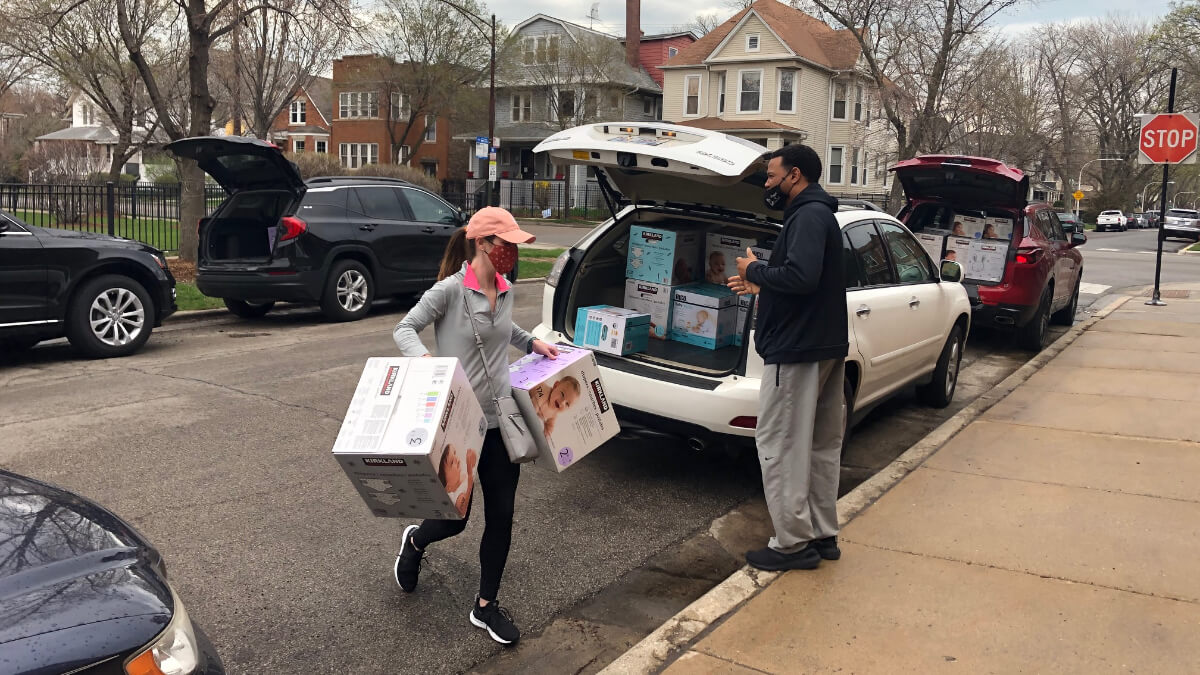 Starck’s Arlington Heights office joined other community groups and individuals to help an Austin church with its diaper drive after all of its donated diapers were stolen. Over 5,000 diapers will be donated to Christ Tabernacle Missionary Baptist Church in Austin.

AUSTIN — Days after people stole items meant for a donation drive for new parents, neighbors and community groups inundated an Austin church with new supplies, including thousands of dollars worth of goods delivered Monday.

Pastor Michael Wright of Christ Tabernacle Missionary Baptist Church, 854 N. Central Ave., said he was “devastated” on Friday after a group of 12-15 people took advantage of an employee working alone and took all the items set aside for a Baby Bank for community members in need.

On Saturday, Wright had to explain to people showing up that the event was called off. After Block Club Chicago wrote about it, people responded to help.

Wright said the generosity of strangers has turned a negative experience into a “blessing.” It’s encouraged his congregation to help others, just as some of them are being helped.

“It’s also inspired people at our church because I never want to be this little Black church with our hand out,” Wright said. “We don’t want to just have our hand out. We need a hand, but we’re not going to play that victim role, ever. Our church members have been inspired to donate things and volunteer, as well.”

Jim and Terry Thacker came from suburban Roselle to drop off some items they purchased. Jim Thacker said it was a special opportunity to help people at the church he once attended as a child more than five decades ago.

Robert Magiet and members of West Town Feeds delivered four SUVs filled with more than 90 boxes of supplies. The group also learned about the theft over the weekend and spent nearly $3,000 on supplies for the church.

Magiet has organized multiple, large-scale efforts to help people in need over the past year.

More recently, he teamed up with local business owner Helendora Samuels to create hundreds of Easter baskets and hot meals for families on April 3.

Berkshire Hathaway HomeServices Starck Real Estate in Arlington Heights also reached out to Wright with plans to donate approximately 5,000 diapers and other baby items this week. Todd Mika, an administrative assistant, confirmed the office was collecting items to give to a charity when managing broker Andrew Stengren saw the story over the weekend and decided donating to Christ Tabernacle was a perfect fit.

“We thought it was a great idea and reached out to them today,” Mika said.

Wright said ultimately he’d like to have enough items to be able to offer them to community members in need on a weekly basis rather than having large events every few months.

Magiet said he plans to bring back his volunteers for the event, maybe to set up a smoker and some barbecues on the sidewalk to provide food.

Looking over the supplies stacked on tables in the basement of the church, Wright said he was “full of hope and joy.”

“So, the good part is that we’ve expanded our network and that’s really a blessing.” Wright said.